The Road to the Cross: Jesus’ Last Days 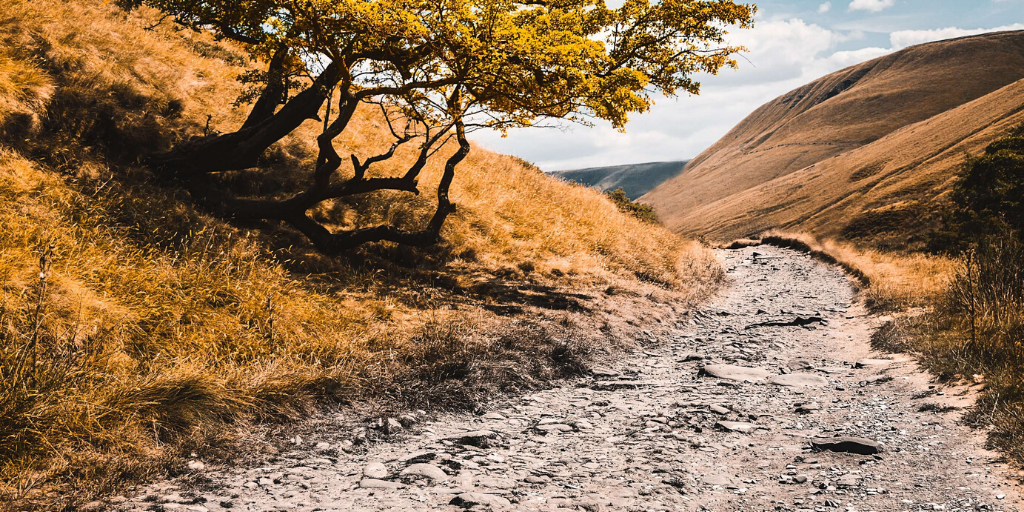 This week, we will follow Jesus through the final events in his life. It’s a very heavy week. Jesus is betrayed by a friend, abandoned by those who promised to be most loyal to him, disowned by his closest follower, arrested, beaten, and mocked. The crowd of people who cheered him as he entered Jerusalem just a short time before will soon shout, “Crucify him!”.

Come along with us as we walk in Jesus’ footsteps and experience Jesus’ last days before the cross.

Jesus was in the garden at Gethsemane with several of his disciples, praying while they slept. As he prayed, he asked God if it was really necessary for him to endure what was ahead of him. He prayed, “My Father, if it is possible, may this cup be taken from me” Matthew 26:39a. Jesus knew what was coming, and he agonized over it. He told his disciples, “My soul is overwhelmed with sorrow to the point of death” Matthew 26:38.

Even knowing what he faced, Jesus surrendered to God saying,

As Jesus woke his sleeping disciples, Judas arrived with a large crowd armed with clubs and swords. Jesus looked this man in the eye as he stood there poised to betray him – this man who had been his disciple; who had eaten with him and sat with him and shared his life and ministry with him. And Jesus said, “Do what you came to do, friend.”

Judas greeted Jesus with a kiss – which was a signal Judas had arranged with the chief priests and elders so they could arrest him. The religious leaders had called for Jesus to be arrested and paid Judas to act as his official accuser (See Life Application Bible Commentary on Matthew, Tyndale House Publishers Inc., p. 526).

Men from the crowd who had been given authority by the Romans to arrest individuals for minor crimes grabbed Jesus and arrested him. Matthew 26:50b.

One of Jesus’ other disciples (John 18:10 tells us it was Peter) desperately tried to stop them. He grabbed the sword of one of the high priest’s servants and cut off his ear. Jesus stopped him and told him to put the sword away. You see, Jesus had already made up his mind that he would faithfully fulfill what God planned for him to do. Jesus could have called on his Father to send his angels to defend him, but he didn’t. He willingly allowed them to arrest him. This was to fulfill what the prophets had written. That didn’t mean Jesus had no choice. It meant that Jesus willingly submitted to the known plan and will of his Father. (Matthew 26:51-56)

It was at this point that all Jesus’ disciples fled. Fear overtook them and they all ran away.

Once Jesus was arrested, he was taken to the home of Caiaphas, the high priest. The whole Sanhedrin had assembled there to accuse Jesus. 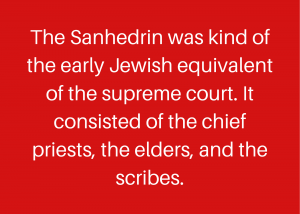 They didn’t have any real evidence against Jesus, so they brought forth false witnesses to testify. Even then, they didn’t have what they needed to put him to death. (Matthew 26:59-60)

Jesus was innocent, but he didn’t defend himself. He didn’t object or fight back.

Then the Sanhedrin asked him point blank to tell them if he was in fact the Messiah, the Son of God (Matthew 26:63).

That was all the high priest and the Sanhedrin needed to hear. They jumped on it.

“ The high priest tore his clothes and said, ‘He has spoken blasphemy! Why do we need any more witnesses? Look, now you have heard the blasphemy. What do you think?’”

“‘He is worthy of death,’ they answered.”

Then they spit in his face.

They struck him with their fists.

And they mocked him.

All this time, Peter had been sitting in the courtyard…listening…watching…

Suddenly, people started to notice him.

“Weren’t you one of the men with Jesus?”

Three times he was asked.

Three times he denied he even knew Jesus.

It was at that moment that a rooster crowed, and suddenly Peter remembered what Jesus had told him: that Peter would disown him three times before the rooster crowed (Matthew 26:31-35). Peter was broken, and he wept bitterly.

“Even my best friend, the one I trusted completely, the one who shared my food, has turned against me.”

Read more about Peter’s story in our post, The Hope Found in the Story of an Unfaithful Disciple.

Judas betrayed Jesus, Peter denied Jesus, and all the other disciples abandoned him; they ran away and hid.

Jesus was now completely isolated from everyone he was close to.

We may have missed the isolation in the past, before COVID-19. But today, with self-isolation, social distancing, and quarantine, we are all experiencing some level of isolation: being separated from our community and those we love. The isolation that Jesus experienced is maybe for the first time all too real for us.

“He was despised and rejected— a man of sorrows, acquainted with deepest grief. We turned our backs on him and looked the other way. He was despised, and we did not care.”

Jesus would face the cross alone.

Jesus is Condemned to Death

Then, because the Sanhedrin didn’t have the authority to put Jesus to death themselves, they brought him to Pilate, the governor of the Roman province of Judea.

“Are you the king of the Jews?”

And again, Jesus was silent as the chief priests and the elders pleaded their case against him to Pilate.

After Pilate listened, he told the chief priests he couldn’t find any reason to charge Jesus with a crime Luke 23:4.

But, Pilate knew there was a custom during the Passover Festival to release a prisoner chosen by the crowd. So Pilate presented a notorious criminal named Barabbas alongside Jesus and asked the crowd to pick one for him to set free.  Pilate knew Jesus was innocent. Barabbas was a convicted murderer awaiting execution. I can’t help wondering if Pilate chose the worst criminal he could possibly find to stand beside Jesus thinking that the crowd surely would choose Jesus over him. What he didn’t know was that the chief priests and the elders had been talking to the people in the crowd working to convince them to release Barabbas.

And so, when Pilate asked the people who they wanted him to release, the whole crowd shouted,

And when he asked them what he should do with Jesus, the one they call the Messiah, they all yelled,

I’m sure Pilate was surprised that his plan wasn’t working. Bewildered, he asked them,

“Why? What crime has he committed?”

But they shouted all the louder,

When Pilate realized he was getting nowhere with the crowd, he gave up. But he didn’t want any of the blame for condemning an innocent man, so he washed his hands in front of the crowd.

“I am innocent of this man’s blood,” he said. “His death is your responsibility.”

Then he released Barabbas. He had Jesus flogged and handed him over to be crucified.

Jesus is Mocked and Flogged

Governor Pilate’s soldiers took Jesus and gathered a large group of soldiers around him. They stripped him of his clothes and put a scarlet robe on him. Then they forced a crown made of thorns onto his head and put a staff in his right hand. They knelt in front of him and laughed as they called him King of the Jews. They spit on him and beat him over and over with the staff they had given him.

Consider what Jesus experienced with the following prophesies about the Messiah:

“Everyone who sees me mocks me. They sneer and shake their heads, saying,  ‘Is this the one who relies on the Lord?Then let the Lord save him! If the Lord loves him so much, let the Lord rescue him!’”

“I offered my back to those who beat me and my cheeks to those who pulled out my beard. I did not hide my face from mockery and spitting.”

When the soldiers were done, they put Jesus’ own clothes back on him and led him away to be crucified.

This post is the fifth in the Easter Series “A JOURNEY TO THE CROSS: 40 DAYS IN THE FOOTSTEPS OF JESUS”.
Read the rest of the series here:

Introduction to: A Journey to the Cross: 40 Days in the Footsteps of Jesus

One Last Meal: Finding Jesus in the Passover

Letting Go of Control: Jesus Prays in the Garden

Reflections for meditation, journaling, or discussion

And click HERE to  get your FREE weekly resources. 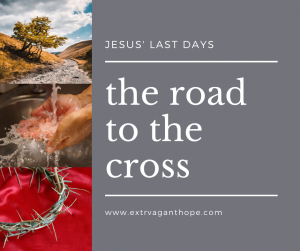 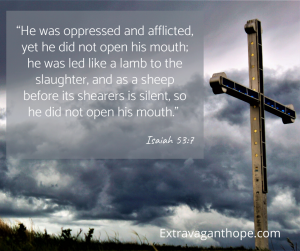 Photo by Harley Upton on Unsplash 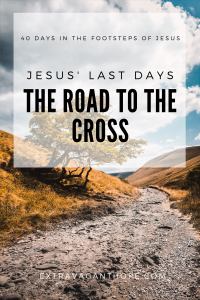 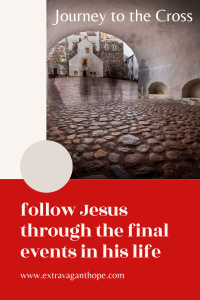 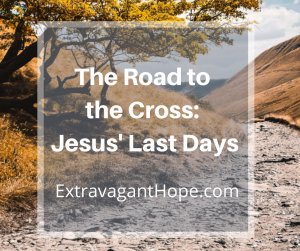 2 thoughts on “The Road to the Cross: Jesus’ Last Days”