What Do You See when You Look in the Manger?

The Sweet Gift of New Life

For me, the baby in the manger conjures up some of the same feelings I experienced when I watched my own babies sleep in their cribs: warmth and sweetness; love and affection; a deep peace and extreme joy. The birth of a baby is always a very special time. There’s something hopeful and promising about new life coming into the world.

I have three grandchildren, and the birth of each one of them was a thrilling and precious time.

I remember how long that 9 months seemed as I waited  for the birth of my first grandchild. It didn’t seem like that baby was ever going to come!

Then, there was the waiting in the hospital waiting room. Three of us anxiously waited together: Two grandmas-to-be and a future uncle…keeping each other company. We tried to doze, but the anticipation kept us awake. We talked, we read, we browsed on our phones and played games on our tablets to pass the time. Every time someone walked past the waiting room door, our hearts beat faster wondering if they were coming to tell us she had arrived. All night we waited. It was a loooong night.

Finally, at about 4:30 in the morning, my son came through the waiting room door with a tiny bundle. She was here! Little eyes squinting. Chubby round cheeks and rosebud lips. Tiny little fingers and toes wrapped in a soft pink blanket. She was perfect!

We waited so long for her to make her appearance. Our precious little one had finally arrived! We ooohed and ahhhed as we held her and peered into that little face under the pink knit hat. We smiled ‘til our cheeks hurt. My heart swelled – like that scene where the Grinch’s grinchy little heart grew three sizes… I felt such love. Such joy.

It’s kind of hard to believe that my heart could grow like that each time another grand baby was born, but it did. Every time.

9 months feels like forever when you can’t wait to meet that new little person.

The Hebrew people waited a lot longer – generations – for the Messiah that God promised.

People watched and looked for this baby to be born…

How long would they have to wait? God had been silent for so long. The waiting seemed to go on forever.

On a Starry Night in Bethlehem…

Finally, one starry night, the silence was broken. The waiting was over. The Messiah had come. A  tiny baby was born in a stable in Bethlehem. The songs of angels announced his birth as his mother wrapped him up and laid him in a manger on the soft hay.

As the news of his birth spread, visitors began to arrive to greet the baby. They all crowded in around that little stable hoping to get a peek.

As they drew close and peered into the manger, what do you think they saw?

Did they just see a baby? Or did they see something more?

What Did They See in the Manger?

What the Shepherds Saw

A group of shepherds heard the news and came to see the baby. When they looked in the manger, they saw a Savior. THE Savior. In Luke 2:8-20, we read that an angel of the Lord spoke to them telling them a savior had been born in Bethlehem; the one God promised would come to deliver them; the one they had waited so long for. The shepherds knelt and worshiped him, and then went off to tell everyone else the Savior of the world had come.

What the Wise Men Saw

Some time later, a group of foreign dignitaries, wise men from the east, arrived to greet the baby. When the wise men looked into the manger, they saw a king; the king they had heard would be born; the king they searched for as they followed the star in the night sky.

Matthew 2:1-12 tells us that they brought gifts for the new baby: gold, frankincense and myrrh. These might seem like strange gifts for someone to bring for a new baby… but not for a king. In the ancient world, gold, frankincense, and myrrh were standard gifts given to honor a king or a deity. They knelt and worshiped him, too, before they went on their way.

As things quieted down, and the visitors began to head home, Mary finally had some undisturbed time to bond with her new baby. But was it just a baby she saw when she looked into that manger where she had laid him? What did Mary see in the manger?

When Mary looked in the manger, she also saw a king, like the wise men did. She saw the king of God’s people. But she also saw the Son of God.

When Mary was visited by the angel, the angel told her she was going to have a baby and that the baby would be very great. He would be called the Son of the Most High and God would give him the throne of his ancestor David (Luke 1:26-38).  And he would reign over Israel forever; his Kingdom would never end. Her son would be a king.

When the angel visited Joseph to tell him Mary was going to have a baby, the angel told him the baby would be a boy and that he was to name him Jesus because he was going to save his people from their sin.

But Joseph saw something more: Joseph saw God. The angel had also told him people would call the baby Emmanuel – and Emmanuel means ‘God with us’. This tiny baby was God wrapped up in human form. God had come close – to repair the rift between us.

Seeing God in the Manger

During his time here on earth, Jesus didn’t come right out and say, “I’m God.” Instead, he alluded to his divine nature in ways that those who were paying attention should not have missed.

When the disciple, Phillip, asked Jesus to show them the father, Jesus said,

“Don’t you know me, Philip, even after I have been among you such a long time? Anyone who has seen me has seen the Father. How can you say, ‘Show us the Father’?” John 14:8-10

When a group of men lowered their paralyzed friend down through a hole in the roof so he could ask Jesus to heal him, Jesus said,

Seeing Our Advocate in the Manger

“The Word became flesh [human] and made his dwelling among us.”

Jesus lived among us. He was born a human baby. He lived, and breathed, and grew, just as any other human being.

In every way, Jesus experienced what it means to be human.

He experienced our temptation, Matthew 4.

God came to be with us.  He experienced our pain as well as our joy.

Hebrews 4:15 says that we now have a high priest who is able to empathize with us because Jesus lived everything we live. He knows. He knows it all.  In this baby who was born that night in Bethlehem, we gained an advocate who knows what it’s like to be us. We can go to Jesus with anything and he gets it – because he’s experienced everything we’ve experienced.

Seeing the Great “I AM” in the Manger

Jesus also made seven “I AM” statements.

“Suppose I go to the Israelites and say to them, ‘The God of your fathers has sent me to you,’ and they ask me, ‘What is his name?’ Then what shall I tell them?”

Who Do You See When You Look in the Manger?

Sometimes we emphasize the divinity of Jesus: The infant Lord of heaven, born to save his people.

Sometimes we emphasize the humanity of Jesus: The baby boy, born in a stable.

This baby that was born in a stable and laid in a manger was many things: the long awaited Messiah, the Savior of the world, the Son of God, Emmanuel: God with us, God’s Word made flesh, our Empathetic High Priest, the bread of life, the light of the world, the good shepherd, the true vine; the way, the truth, and the life…and he was a man, a carpenter, a brother, and Mary’s little boy.

Who is it that you see when you look into the manger?

I hope you see so much more than just a baby.

From now on, when you look into the manger, I hope you see all of who Jesus is and why he came.

I hope you see the love, the life, the empathy, the reconciliation, the forgiveness, the healing, the hope, the peace and joy that Jesus came to bring us.

Need more hope? We’d love to stay connected. Sign up here and get tons of faith-filled freebies including a prayer journal, memory verse cards, printable art and more. Grab the freebies below… 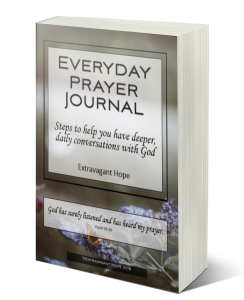 Get FREE instant access to Extravagant Hope’s eCourse called
How to Respond When You Hear God Speak: Steps to Take When You Don’t

Yes, I want the FREE eCourse! 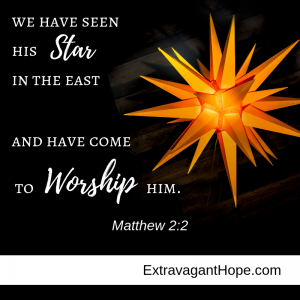 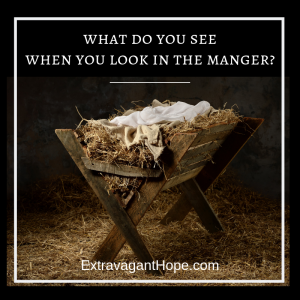 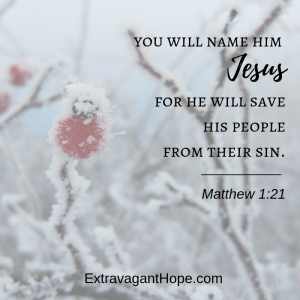 2 thoughts on “What Do You See when You Look in the Manger?”